If there’s a spectacular, but under-utilized, fishery on Fort Peck Reservoir, it has to be lake trout. They’re targeted at certain times of the year, but most of the time, few anglers go after them. And when you consider how much deep-water habitat there is for them, it’s indeed a lightly-fished species. 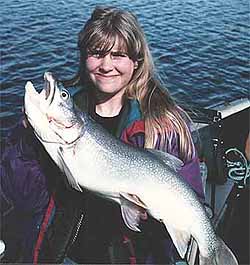 Lake trout have been eating well since cisco was introduced.

Both lake trout and chinook salmon have been major beneficiaries of the introduction of cisco into Fort Peck in the mid-1980s. Since about 1989, cisco populations have spawned and flourished providing a good, deep-water food source. Also, since lake trout are long-lived and slow growing, we have yet to see how big they might grow in Fort Peck with that good forage base.

My lake trout fishing is mostly done in the spring, as soon as the ice comes off. Late April and much of May is prime time for lake trout out of Hell Creek, with an occasional chinook salmon picked up for good measure. My favorite tactic is to troll crankbaits and run planer boards so that four rods can be fished out of the back of the boat. With deep-diving crankbaits, we work deep underwater points, bouncing the baits off the bottom, which seems to trigger strikes. 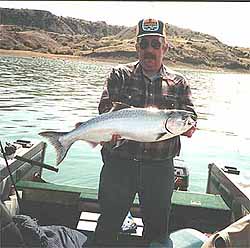 As this fishing time progresses and the water warms, lakers will drop from 15-to-20-foot depths out into the 30-to-35-foot depths. With real deep divers and line-counter reels, we go after them down there. The lake trout average from 10 to 12 pounds, depending on the year, with several fish going well up into the teens. It’s rare to get one 20 or more pounds, but a few are caught each year.

We pick up lakers as well during late August and into September and October when we’re targeting chinook salmon. Most of the chinook salmon action is in the Fort Peck Dam area. In good years, it can be very good fishing. While lake trout reproduce on their own in Fort Peck, Montana Fish, Wildlife and Parks has stocked upwards of several hundred thousand chinook salmon annually in recent years.

This late summer and fall fishery is done with downriggers. Most often, you run flashers and squids at depths of about 80 to 120 feet. The chinook salmon are spectacularly strong and fast fighters. A number of fish up to 20 pounds are caught each year with a few approaching 30 pounds.

While lake trout are relatively steady performers year to year, the chinook salmon bite has been an on-again, off-again situation from year to year. If you’re interested in fishing for chinook salmon, it’s a good idea to keep your eye on the Fishing Report and to call ahead or e-mail to check the status of the bite.